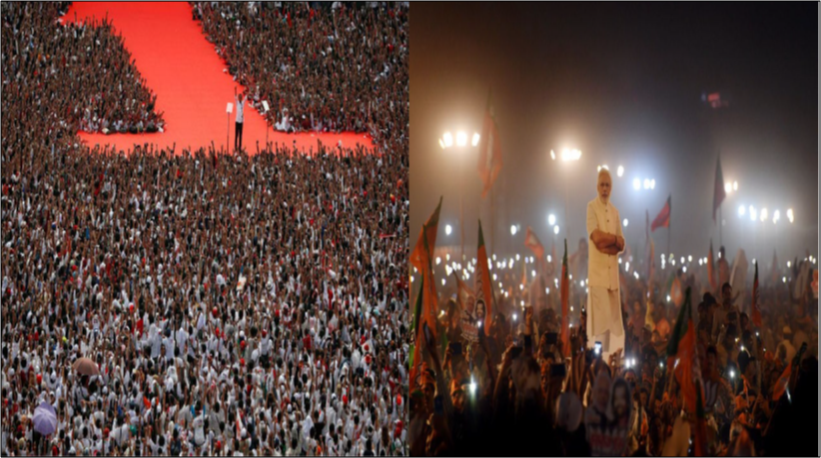 It is quite ironical that EM, often perceived as a hotbed of political struggles, offers glimmers of stability today, when DM is roiled with all-round political uncertainty. Enough, probably is not quite enough though given a choice many would “shun” the uncertainty surrounding us. On the contrary, EM still offers plenty to “elect” (and “shun”) which is worth a discussion for investors. Recent EM elections in India, Indonesia, South Africa, etc. provide some key takeaways generally relevant when investing across the developing world while recognizing that EM is not a monolithic block and each region/country needs to be appreciated for its uniqueness.

In EM as in DM, identity politics seems to be replacing broad party-based politics, which in hindsight made things more predictable by following party ethos and past conduct. It is true that across the global landscape an undercurrent that runs deep is a wave of leaders with whom the majority can identify (Modi, a Chai-wallah, Jokowi, a furniture salesman), and who in their minds embody their social and economic aspirations. The widening divide between have and have nots has led many to identify with leaders who espouse to be with the common man and can level the playing field and weed out corruption and ill-gotten gains. When do-ers who also appear to be well-intentioned thinkers, come to the fore, hopefuls latch onto them as witnessed recently with victories of Modi in India, Jokowi in Indonesia, Ramaphosa in South Africa, AMLO in Mexico and Bolsonaro in Brazil.

Their cult following or political muscle, whatever be the case that vaulted them into power, bodes well for their ability to pass progressive legislation with little opposition from other vested groups. On the flip side, it raises questions about necessary checks and balances in the system. That probably explains the assertion by a report in The Atlantic that “populists are highly skilled at staying in power and pose an acute danger to democratic institutions,” based on a study of 46 populist leaders or parties worldwide since 1990. Hence the Western press, in the aftermath of Modi’s recent landslide victory in India, is wallowing in doubt if the path ahead for India is one of religious nationalism (aired by some Modi followers) or that of furthering his economic agenda, the foundation for which he laid out in his first term, from most accounts. Similarly, one could question the motives (economic growth or promoting Islamic conservatism) of Jokowi in Indonesia, a moderate Muslim himself, who chose Ma’ruf Amin, a conservative Muslim cleric with no government experience, as his running mate in part to burnish his Islamic credentials.

Though easier said than done, investors would be better served if they looked past media stories and evaluated how such leaders have streamlined regulations and implemented policies however, rudimentary (e.g. subsidized toilets and cooking-gas cylinders, and quickly processed loans for self-employed, etc.) as initial steps to overhauling their economic juggernauts, practically a herculean task in a short term. One must appreciate that in many EM economies, reforms begin from a very low base given years of neglect, corruption and deep-seated resistance to change. What’s instructive is “electing” to follow some on-the-ground realities of how these leaders fight many odds to impact businesses at the grassroots in terms of: consumer confidence, housing, manufacturing and infrastructure growth, technology adoption, private sector development/ privatization, credit flow and capital market reforms, governance, labor mobility, etc. Such micro factors are more telling for idiosyncratic opportunities, embedded in related investments (affording complexity, inefficiency premiums for savvy alternative investors) in public or private markets. Basing EM investment decisions on pure headline economic statistics e.g. GDP, current account deficit/surplus, forex reserves, etc. at the macro level, runs the risk of missing out opportunities or for that matter avoiding/exploiting risks that might be tied to game-changing policies and regulations often altering the status quo.

If consumer is the backbone of many emerging economies, efforts to maintain and boost consumer confidence is key which is the flip side of controlling inflation. Argentina and Turkey are classic examples of sagging consumer confidence amidst persistently high inflation, reflecting poorly on their administrations. In South Africa, it is important to recognize that chronic power disruptions and slow policy reforms, take a toll on consumer confidence levels and consequently real estate. In the day and age of online retailing, it is important to observe e-commerce rules that impose limits on the types of businesses that online retailers can undertake. Favorable laws to allow foreign participation in e-tailing is a positive, especially when consumer remains the biggest draw for EM investors. Regulatory overhaul in key industries like telecom, IT, energy, etc. could improve business climate as much as govt policies to enhance the ease of doing business for global firms as with India that now ranks 77 among 190 countries compared with 134th in 2014. Along similar lines, it is important to unwind protectionist policies that restrict Foreign Direct Investments, a debilitating factor for Indonesia but an enabling one for India. Lastly, government policies to grow retail businesses through consumer credit is equally important which is gradually taking root in many EM countries, courtesy venture-fueled fintech.

Related to consumer is support for housing which is often an important economic driver. For instance, housing in Brazil is gradually growing under Bolsonaro, propelled by higher disposable incomes, stable unemployment rates and low interest and mortgage rates. On the other hand, Argentine home sales are suffering amid falling salaries in real terms, high unemployment, and high interest and mortgage rates. Mexico’s homebuilding sales volumes are facing a decline in 2019 following AMLO’s withdrawal of the federal housing subsidies program. Modi govt’s measures are expected by many to prop up residential real estate, with the emergence of the REIT sector despite a five- year delay since Modi first set the regulatory stage to bless the REIT industry’s tax-free structure (followed by a more sweeping tax change that went into effect in 2017). This is a case in point of a radical change that has created a new opportunity for overseas (alternative) investors willing to look beyond headlines and headline economic numbers.

Besides housing regulations, policies that encourage adoption of new technologies enhance manufacturing efficiencies and smartphone-enabled technologies such as mobile banking and other fintech innovations have ushered broader financial inclusion in India, big parts of Africa and LATAM. A manufacturing push such as “Make in India”, rising incomes and urbanization as also witnessed in Indonesia provide the impetus for infrastructure development. Supporting consumer, housing and infrastructure, is availability of capital through banking channels and capital markets. If banks, especially public sector banks as in India are saddled with nonperforming assets to prevent substantial new lending, it warrants massive recapitalization of banks to stimulate private investment. The Insolvency and Bankruptcy Code 2016 introduced to remedy this situation offers a potential opportunity in Indian bank NPLs though still in its early days.

Independence of the central bank from the government is often called into question as observed in India, China and Turkey (ironically at the Fed too). Oil importing countries like India and Indonesia warrant monitoring of their oil import bills vis-à-vis forex policy where currency weakness hurts imports and external debt loads but also offers a competitive advantage for exports. Equally important is the role of the private sector vis-a-vis state owned enterprises that often enjoy state subsidies despite chronic production inefficiencies and poor returns on invested capital. Privatization can place sluggish state enterprises into more energetic private hands presenting potential opportunities as planned for by Saudi Arabia. In the same vein, promoting social spending rather than endorsing private sector spending (principles of Modern Monetary Theory) could be a headwind for the private sector and thus investments.

However, in many instances the private sector lacks flexible labor laws to expand and retrench at will without provoking organized and entrenched labor unions sparking social unrest or creating perverse incentives for substitution of labor with capital.  The political will to tackle a rather thorny issue such as this is key. For example, the Industrial Disputes Act in India requires businesses that employ 100 or more workers to seek prior permission from the government before retrenching workers or closing down their establishments. In this regard, lack of social security in the form of unemployment benefits is important to note. Similarly, labor disputes often pose a risk to South African mining just as a new carbon tax regulation provides a further disincentive for new investments in South Africa’s downstream sector. Lastly, in several emerging markets, poor governance stems policy unpredictability and corruption scandals.

As many policies are years into making and implementing, immediate results is wishful thinking, but policy certainty through re-election of muscle-leaders is a wish filled. Where it impacts in the near term is in defining the operating environment in terms of policy, market sentiment, capital flows and credit metrics. Influencing economic growth is probably the end goal though investors can take comfort that economic growth is not necessarily a reflection of investment performance. As the Economist (May 25) puts it, “economies and stock-markets do not match up well, even in rich countries. America accounts for 55% of MSCI world index but a much smaller share of the world economy. The best reason for investing across borders is not to plug into faster GDP growth (for which you may overpay), but for diversification”, which we interpret as diversified streams of idiosyncratic returns i.e. alpha.

At the risk of pontificating, as investors, we should resist succumbing to our pre-conceived notions or biases fueled by the popular press that routinely debates the ills and virtues of regimes that are broadly described as socialist, capitalist, authoritarian, democratic, nationalist/populist, etc. Investors who do subscribe to such prejudices either shun regions/countries altogether or flock in droves mesmerized by political leaders vaulted to their demi-god status, hoping to enjoy their economic miracles e.g. headline GDP numbers. By the same token, EM investors would be prudent to look beyond “remote” opinions formed in NY or London of what such generalized descriptions might suggest or blindly follow what a Bolsonaro in Brazil, a Modi in India, a Jokowi in Indonesia or a Ramaphosa in South Africa might bring.

To the extent, we “elect” to evaluate each individual policy announcement from these leaders for any potential opportunity or risk on the horizon, we can think through our investments objectively without following the herds in or out of EM because of widespread notions that nationalism is bad, and democracy is good, or Modi is a religious zealot or Jokowi failed to achieve his infrastructure development goals.

As new political orders evolve in EM, ÊMA remains intellectually curious to learn how local EM managers interpret and respond to the changing business dynamics to tap into opportunities, equipped with local knowledge, expertise and networks. ÊMA continues to conduct independent investment audit/due diligence on various such EM- based managers who can react deftly and timely to capture opportunities, to the benefit of LPs’ portfolios. Stay tuned.

Questions, comments and related inquiries from LPs and GPs are welcome at [email protected]